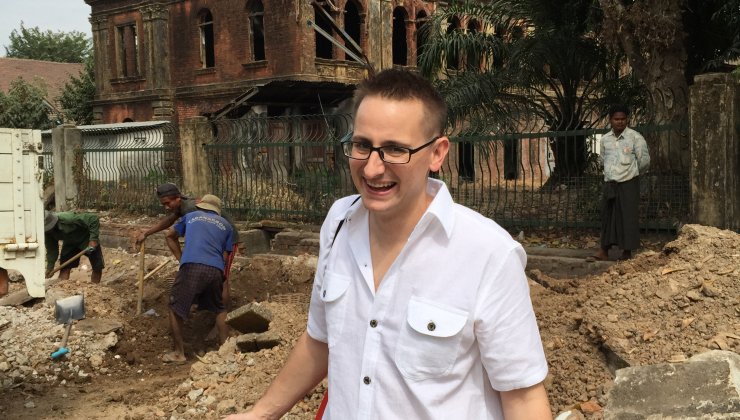 With Love from Burma

Currently I’m writing this from a chaotic, messy café in downtown Yangon, Burma. I’m wrapping up work before I head off for 12 days in Burmese monastery starting Sunday. I return to Bangkok on February 27.

For those who have tried to reach me lately: Yes, I’m safe. But I’m almost completely inaccessible because Burma still suffers from daily blackouts and extremely poor Internet.

While the good news is that coffee and a snack only runs me about $2.50 in Burmese coffeeshops, the bad news is that you get what you pay for when it comes to the Internet in these places. This is the best Internet going, too, despite paying a little extra for hotel accommodations in Yangon (accommodations are very pricey here, and there’s not much a hotel can do done when the government shuts off the Internet).

I’ve snuck in a little sightseeing, including visits to several Buddhist monasteries, a Catholic church, and several Chinese and Hindu temples. But much of my time is work, as I stockpile stories and handle last-minute tasks before I become inaccessible on Sunday.

While I may seem inaccessible now, there’s a big difference between spotty connectivity and not electricity at all.

I’ll write about my thoughts on how Yangon is changing in early March when I am back in Bangkok. I’ll also post photos then. For now, uploading a 3 megabyte photo is a luxury that’s hard to find in Yangon.

This was expected, however. In terms of Internet connectivity, at least, Burma has not changed much since 2013.

« Meditation and Research in Burma
Next Stop, Australia »
Awesome. Got it! Please check your email for further instructions.