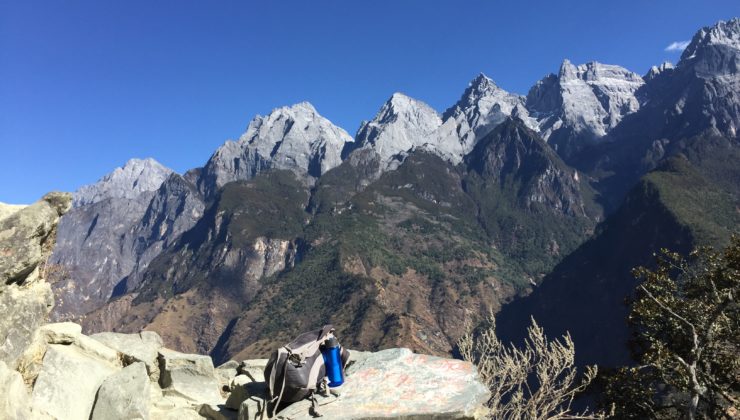 The landslide was the moment that it became life or death.

The lack of food along the trail had weakened me, and the elevation combined with poor conditioning made the hike tough. When I encountered the waterfall, with its slippery rocks and only inches between me and the chasm below, each step hinted at the end of my life. But it was the landslide, trapping me on a narrow ledge alone and cold, high in the mountains of Western China, that made me think of my loved ones and wonder if I would ever see them again.

I was on Leaping Tiger Gorge, one of the most dangerous climbs in the world, and likely I was about to perish.

This is how the blogs and travel guides often describe the hike, at least. In reality, it wasn’t hard and it wasn’t dangerous. None of the above actually happened (outside of my mother’s imagination). Hiking Leaping Tiger Gorge in China, near the border with Tibet, was far more beautiful than the blogs suggested. But it also was a lot less scary. 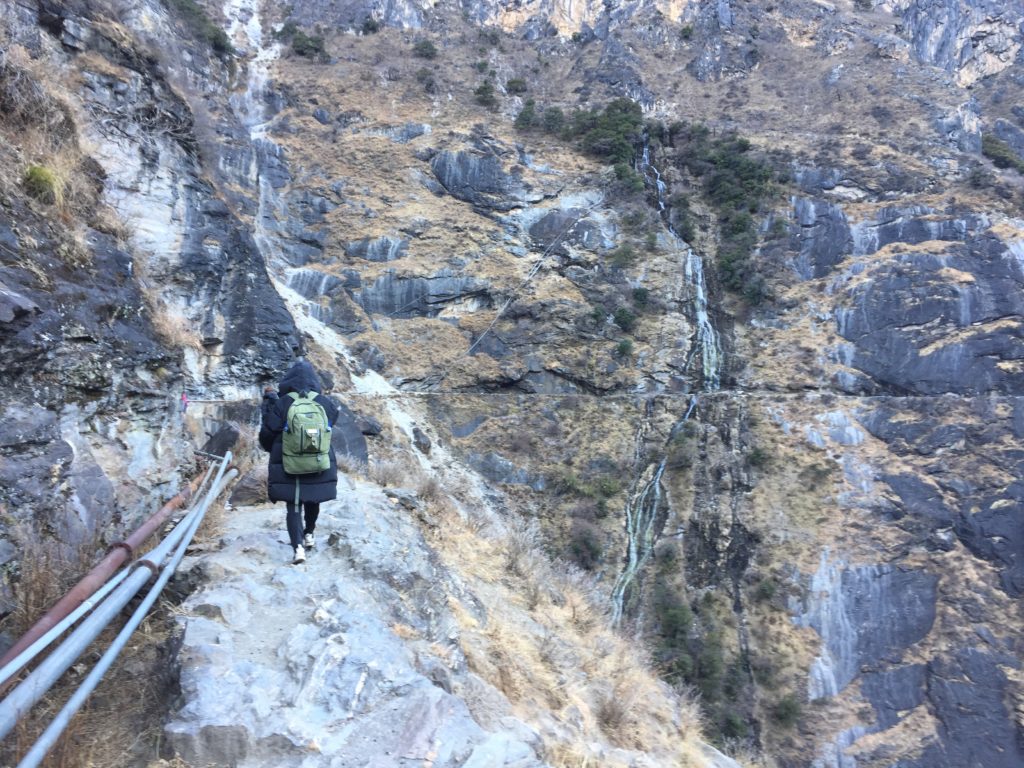 Remember, This is China 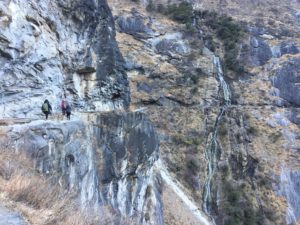 Hike from Halfway Guesthouse on the upper trail of Leaping Tiger Gorge down to Tina’s Guesthouse.

I understand why the bloggers and the travel guides scare people. Half the time there were no guard rails, so technically you could take three steps right and fall to your death. There also was a surprisingly sketchy optional trail for thrill-seekers at the end by the buses and the main guest house. This optional trail charged admission, included a couple rickety bridges along with the viewing platforms, and featured the one truly dangerous element of the hike: a death-defying climb up a tall wooden ladder that hugged the sheer cliff-face. If your arms got too tired or your legs gave out, you would plummet to your death.

But this is China. Everything is mediated and sanitized, even your hike through the mountains. It is not coincidental that the most dangerous element of the hike was a man-made ladder with an alternate path you could take if your nerves were weak. If this alternate path still was too much, you could hire a donkey along the way that would carry you to the top. 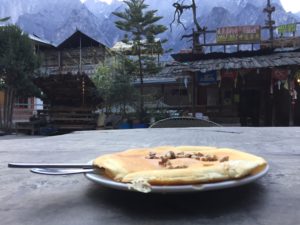 Leaping Tiger Gorge was a real hike in nature, and there wasn’t a cable car that took you to the top (not yet—they’re building it). But there was a paved lower road that let you take a bus, hike a few hours, then get back on the bus and bypass the most strenuous parts of the journey. About half of those on the trail were middle-age Chinese, Singaporean and Korean women who would magically appear and disappear throughout the hike. You’d see them at the handful of guest houses along the way, and at key hiking spots on the trail.

For the trek I had packed really light, ready for anything. These were the mountains, after all, and I was hiking alone. Most of what I brought was dense food like beef jerky, Snickers bars and dried fruit. I also brought water and plenty of warm stuff in case I had to sleep out in the cold. I didn’t bring a charger for my iPhone because there probably wouldn’t be electrical outlets.

But I didn’t need any of it. I could have gone with just a few hundred Chinese Yuan stuffed in my pocket. 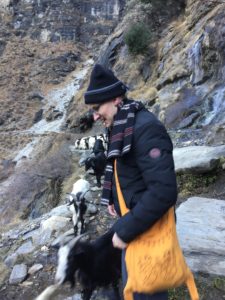 Goats found along the way.

There were roadside stands placed strategically along the trail, manned by Naxi villagers who waited all day to sell you a bottle of water or a bag of chips (or a drag of Marijuana; I did not partake). The path was clearly marked, with guest houses placed every few hours and signs that let you know you never were far from food and shelter. Strong 4G cellular service blanketed the mountains, and there was both Wifi and electricity at the rest stops.

You would have an easier time watching YouTube videos on Leaping Tiger Gorge than in New York City’s bustling Herald Square. The Indian Himalayas this was not.

The reason that blogs regale you with stories of danger and scare your loved ones about the gorge is because there’s just enough wildness, just enough effort required, that you want it to sound dangerous and epic. You spent two days hiking gorgeous mountains in the wilderness of Western China. And you’re shit tired at the end of it when you walk the whole way. This begs for some embellishment and humblebragging.

If you squint and overplay the experience, Leaping Tiger Gorge can make a really exciting blog post or Facebook story. But it isn’t really dangerous. It just is a nice hike with some really, extraordinarily pretty views. 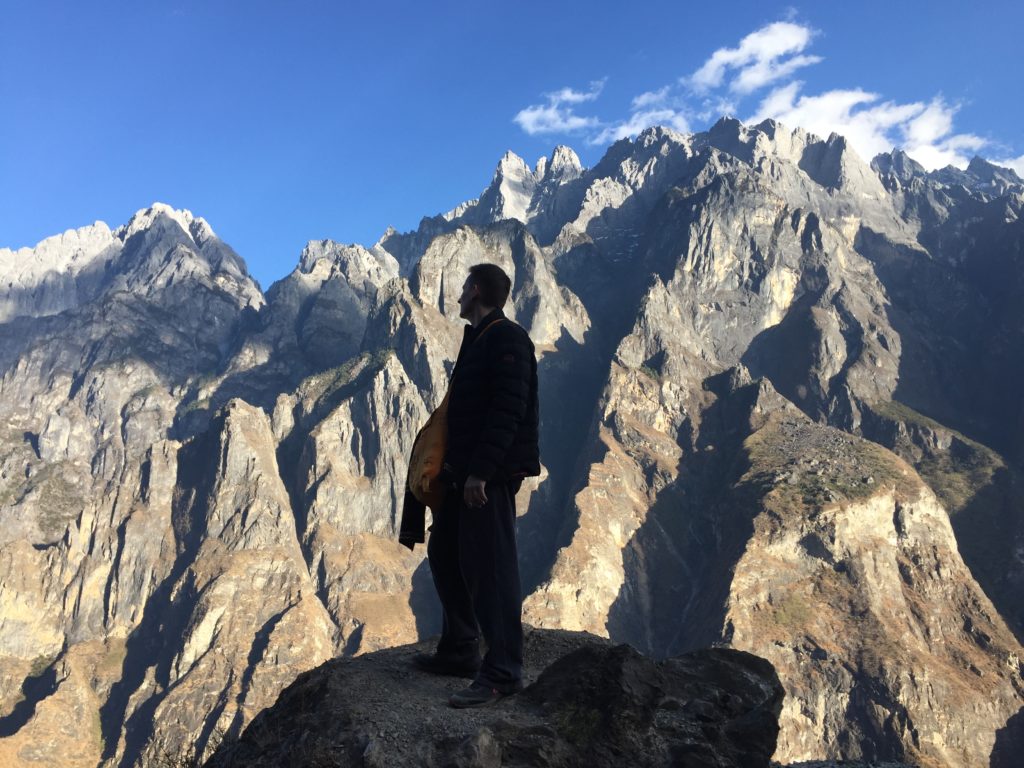 The third and final leg of the day on the upper trail at Leaping Tiger Gorge.

The Beauty of the Jade Dragon Snow Mountains

Literally; the mythical town of Shangri-La is a real place 2-3 hours west of Leaping Tiger Gorge. You can take a direct bus to Shangri-La from Tina’s Guest House in the gorge every afternoon at 3:30pm. 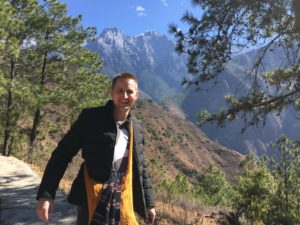 Hiking the second leg of the upper trail at Leaping Tiger Gorge.

I don’t know if the real Shangri-La is as picturesque and perfect as the fictional one described in the famous James Hilton novel, Lost Horizon. Two of my companions made the trip after we hiked Leaping Tiger Gorge, but I headed back to the charming Lijiang Ancient City because I had to catch a flight.

It probably is stunningly pretty, though, because Leaping Tiger Gorge is far more picturesque than anything I’ve seen in photos.

Once you hike up the mountainside, past the asphalt road and the two bridges China is constructing in the valley, you encounter the type of vistas I had only previously seen in Ansel Adams photographs. You keep taking photos of these big, snow-capped mountains that surround you and extend out into the distance, but everything looks like a postcard. This trivializes the experience, and eventually you give up trying to capture what you see.

The hike is not the real draw, at least it wasn’t for me. Walking two days straight in Leaping Tiger Gorge is more about finding an excuse for those picturesque mountains that extend in all directions. You can’t stare at them forever, so you walk. Then when you are tired, you stop and admire the view again—this time from a slightly different vantage point. That’s the reason you hike Leaping Tiger Gorge. 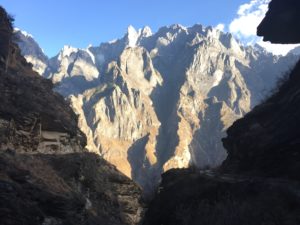 The third and final leg of the day on the upper trail at Leaping Tiger Gorge.

In this way, hiking the gorge is really an extended meditation on the beauty and grandeur of the natural world. We see beautiful nature every day in video and online, but rarely do we journey deep enough to really see it with our own eyes, to surround ourselves with it as we do when we hike the gorge.

Right now, Leaping Tiger Gorge is mediated enough that the journey is easy and safe. But at the same time, it isn’t yet a full-blown tourist attraction that compromises the natural world. Maybe that’s the valid reason for making the hike sound scary: it protects the trails from too many visitors.

Leaping Tiger Gorge might have been a lot less dangerous than I feared, but it delivered on the pretty and the majestic. It cut a nice mix between the natural world and the civilized one, at least right now.

So put Leaping Tiger Gorge on your bucket list, pack light, and don’t worry about the safety. You might even consider bringing your mother along if you’re open to taking a bus or riding a mule. 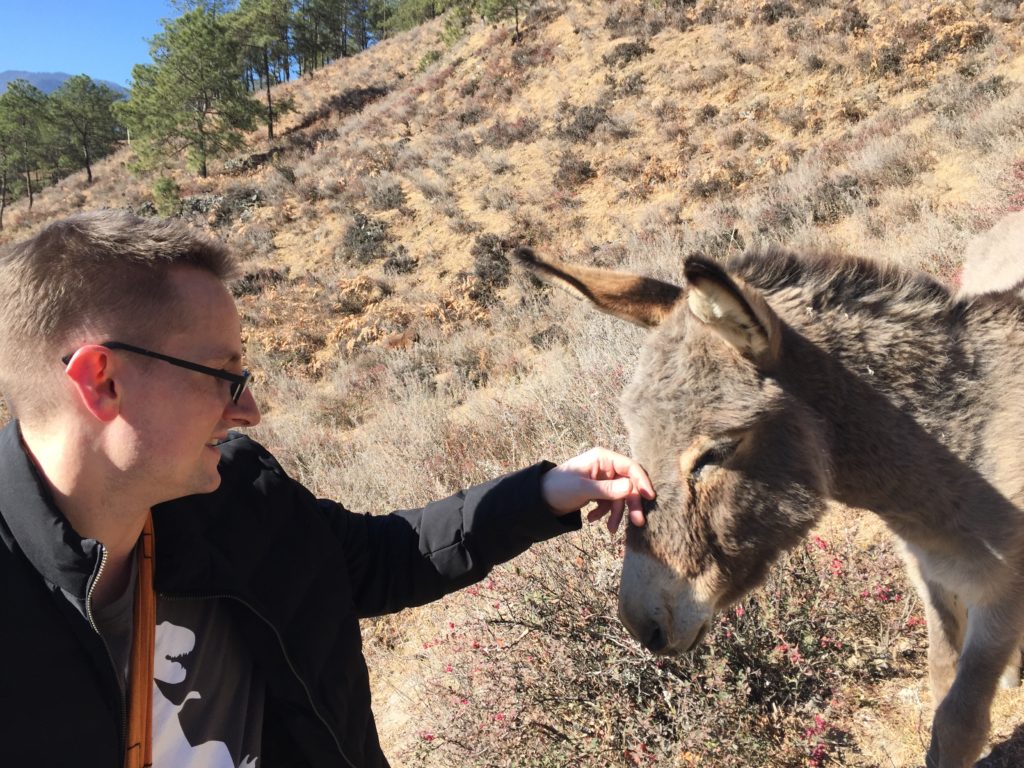 Making friends with all the animals in the kingdom.

« 2018 Year in Review
Coming to America (Wow, that Sounded Strange) »
Awesome. Got it! Please check your email for further instructions.