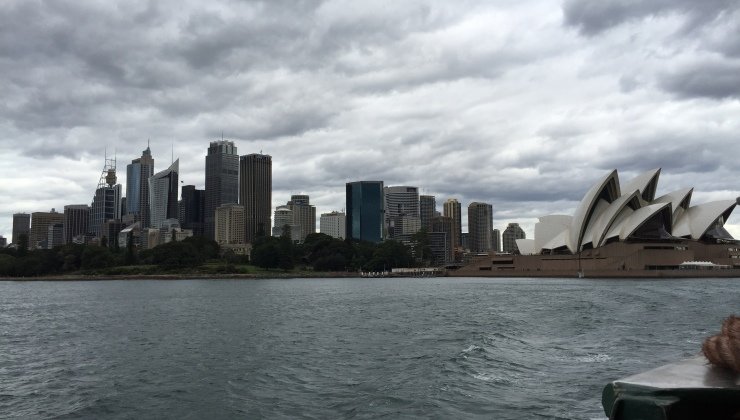 Right now I should be at the Blue Mountains, my “outback” moment on the outskirts of Sydney when I hike through the bush and later regale people with Crocodile Dundee stories. 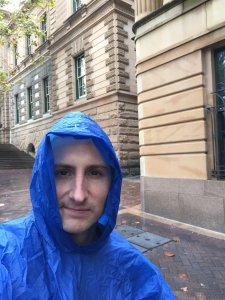 Unfortunately, I’m at home in my bedroom at the Vedanta Centre of Sydney instead. This morning it was downpouring rain, so I stayed home instead. Almost as soon as I gave up my opportunity to visit the mountainous range, however, the clouds parted and now it is the best weather I’ve seen in Sydney. Ah, well.

The sun and I have been playing a cat and mouse game since I arrived in Australia on April 1. I will work from home and it will be sunny, then I go out to see the sights it rains hard. Almost all of my photos in Australia, especially in Sydney, feature dark clouds and rain.

It also is unusually cold here in Sydney, and I’ve been wearing my lone sweater just about every day (why only one sweater? Because I’m monastically-oriented, and because most of my trip features tropical weather.)

At least there’s family. The Australia leg of my trip has largely been about meeting and staying with my Vedanta family down under. First I stayed at the Vedanta Centre of Brisbane, and now I’m at the Sydney monastery. On April 13, I head to visit the Vedanta community in Melbourne.

Much of this visit with family happens in the margins: At meal times, and during the daily worship services in the temple. There are four monastics stationed here in Sydney, along with a couple more swamis visiting from other parts of the world. I talk and spend time with these monastics and the other devotees supporting the monastery mostly during meal times. The rest of my hours are spent on the ill-fated tourism and my freelance writing; I still write between 12 and 15 articles per week.

As time permits, I’m also ramping up the next phase of my life, which begins when I return to New York in June. My current writing contracts all expire in June, so I’m working on finding new work while also juggling my current contracts and travel.

One area I’m spinning up is Kowalke Relationship Coaching; I’m in the process of launching the site and preparing for the weekly relationship coaching videos that will pepper my Twitter account soon. This has meant buying and learning some new video equipment. I’m also improving my social media presence, as most of you probably already have discovered. Buffer has been my friend.

After a few days in Melbourne, I leave Australia on April 17 and continue the road show by visiting Vedanta monasteries in Kuala Lumpur and Penang. I then head to India for my annual visit. This year I will be staying at monasteries in Calcutta, Delhi and the Himalayas. This will be my first visit to the renowned Mayavati ashram, and I am particularly looking forward to that part of the trip.