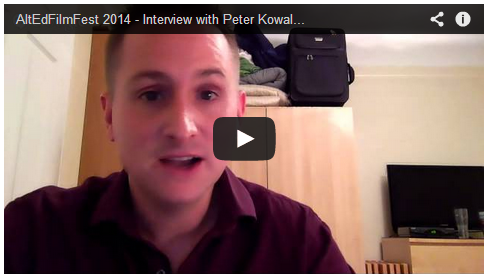 Grown Without Schooling on AltEdFilmFest

Grown Without Schooling, Peter Kowalke’s provocative documentary on the lives of grown unschoolers, has been featured this year on Steve Hargadon’s AltEdFilmFest 2014.  Fourteen years after it came out, its message is, I think, even more relevant than ever before.

As part of AltEdFilmFest, Steve Hargadon and Peter Kowlake recently had a “face to face” webcam interview about the finer points of “Grown Without Schooling”.  They spoke on everything from the process of filming and editing, to the choosing of the range of subjects and people for the film, to propositions of how a documentary titled “Grown With Schooling” may look surprisingly similar.  Hargadon’s fresh take on the message mixed with Kowalke’s insightful retrospect make for a great discussion.

After watching the interview, I was highly inspired both to go watch the documentary again, as well as, of course, looking into making my own documentary – especially since, according to Peter, Final Cut Pro now makes editing SO much easier.

You can watch the interview for yourself here, and start a further discussion in the comments below it.

And don’t forget to check out the actual documentary!  Grown Without Schooling is an insightful and inspirational film, whether you’re re-watching it or a first time viewer.